Andermatt, a small Alpine village in Switzerland is fast becoming a skier’s dream and should be  somewhere near to top of your ‘Skiing Bucket List’ for the near future. Its rise is due to a recent redevelopment project that has put Andermatt on the map! Fast chairlifts, snowmaking guns and snow-farming, high-end hotels and a car-free satellite village of luxury apartments, Andermatt Reuss, just outside the still reassuringly picturesque original Andermatt.

Andermatt’s Gemsstock Mountain has always appealed to freeriders and off-piste powder-hounds, but the ski resort has virtually doubled in size in recent years, with links to Sedrun opening the ski area up to cover a vast 181km of snow-clad terrain. Although the mountain still has a gnarly side, more gentle terrain can be found at Nätschen. A ton more beginner terrain can be found at Sedrun, which also operates late night skiing.

Whatever your ability, perfectly groomed slopes, idyllic toboggan runs and demanding descents make the SkiArena a paradise for every winter sports enthusiast.

Off the slopes, Andermatt still holds its authentic Swiss charm. Although it’s apres-ski scene isn’t as lively as some of Switzerland’s more famous skiing destinations, such as Verbier, there is still tons to do once you’ve kicked off your ski’s. From Ice climbing to Ice skating, tobogganing to sleigh rides through the town… Anderamatt is all about sitting back, relaxing, embracing the local culture and just generally soaking up all this Swissness.

A Snow-Assured resort, in the heart of the Swiss Alps

The SkiArena Andermatt-Sedrun is located in the heart of the Swiss Alps. The excellent climate and the high elevation ensure optimal snow conditions for skiers and snowboarders throughout the entire season. The modern lifts, perfectly prepared slopes, assurance of snow in the region and 120 km of pistes make SkiArena Andermatt-Sedrun the most attractive in Central Switzerland.

A range of excellently groomed slopes include a selection of beginner runs, wide open intermediate pistes, freeride off-piste territory and even a fun park.

The immediate skiing area, above Andermatt itself, is divided into two distinct areas. The Gemsstock is a freeride paradise with a 2-stage gondola accessing a handful of Red and Black pistes and an extensive expanse of off-piste terrain with generally north-facing slopes that catch and keep the often abundant snow-falls that bless the area.

From the other side of town, the “Gütsch-Express” gives fast access to the varied mix of slopes on the “sunny side” of the valley – including the MATTI Kids-Arena. New lifts (completed in 2018) take skiers into the next valley, via the Schneehüenerstock, and beyond to the village of Sedrun. Alternative access is provided by the Matterhorn-Gotthard Railway that runs between the villages, allowing skiers and boarders to catch their breath, take in the view and even enjoy a unique Apres Ski Bar carriage.

In addition to downhill ski runs, there are a number of cross-country ski routes near the villages. Winter hiking and snowshoe routes are also marked out, together with sledging trails.

Challenging and varied, the ski resort will appeal to everyone from those who are new to skiing to serious freeriders who will enjoy thrilling descents such as the 1,500m vertical drop off Gemsstock; one of the world’s best freeride destinations.

Sunshine, deck chairs, fine coffees and a strong backdrop: the Himalaya Bar on the ski slope between Andermatt-Nätschen is very easy to reach for skiers as well as for sledgers and winter hikers. After a sausage from the grill or a homemade pastry, winter sports enthusiasts are fortified to return to the valley.

The Biber Bar is right in front of the soldiers’ house. It was opened in December 2017. The sunny terrace with a wonderful view of the mountains invites you to have a coffee, lunch or après-ski from 3 p.m. You can end a great day of skiing with harmonious music.

In the warm ambience of the “old pharmacy” in the middle of the village centre of Andermatt, a day can be wonderfully ended in with a glass of wine, a cocktail or one of the various single malts whiskeys. If you are feeling peckish there is a “Zvieri-Plättli”, a burger or tapas in the evening. Regular live music evenings.

The Postillion Bar is located in the centre of Andermatt. It is open from 5 p.m. and is ideal for a detour after skiing or dinner. In this bar, tourists and locals meet and party until late into the night.

1620 is the year of construction of the beautiful wooden house in which the “Enoteca 1620” is located in the centre of Andermatt. Selected wines from Italy and the Mediterranean region are served in the wine bar. The cozy meeting point for a stylish glass of wine with friends.

All aboard the après-ski train! Eight times a day, the converted train carriages travel through the Oberalp Pass and shuttle snow enthusiasts from Andermatt to Disentis or back, entertaining them on the way. The rolling barkeeper Victor offers drinks and local specialities on board, while at weekends a DJ really fires up the crowds, turning the carriage into a small but fabulous party venue. The unique après-ski train provides six disembarkation points to reach the pistes or to get home – free-of-charge for ski pass holders.

Quaint pubs with regional specialities, colourful children’s restaurants, excellent top restaurants, authentic pizzerias or mountain food restaurants with vegi-friendly menus and local products: feasting is the order of the day with us!

The Matti family restaurant is located directly at the middle station of the Gütsch-Express and near the Nätschen train station. Here Matti’s bear cave invites you to play and linger, and there are child-friendly menus for the kids. From the large terrace you have a fantastic view over the Urserental.

In the Gütsch gourmet restaurant by Markus Neff  you can expect clear, stringent compositions without frills and with a lot of respect and love for the local products. On the large sun terraces you can enjoy – in addition to excellent food and drinks – a spectacular view of the Oberalp Pass, Gotthard and the Ursern Valley.

The Japanese is probably the highest Japanese restaurant in the world! Responsible for Executive Chef Dietmar Sawyere, the gourmet restaurant is only one of two Japanese restaurants in Switzerland to have a Michelin star. It offers elegant and modern Japanese cuisine at the highest level.The Japanese by The Chedi Andermatt  is very close to the top station of the cable car Gütsch Express at 2,300 meters above sea level. From the large terrace you can enjoy a spectacular view of the Oberalp Pass, Gotthard and the Ursern Valley.

As you would expect from the name, the Schneehüenerstock panorama restaurant offers breathtaking view of the Ursern Valley and the Surselva. From the large viewing terrace you can see over 100 peaks. The specialities of the self-service restaurant are the roast chicken from the region as well as the rich brunch buffet on Sunday.

The Spycher restaurant, located in the centre of Andermatt, is a popular meeting place for locals and tourists alike.  Fish specialities, Coffee & cake, Regional specialities, Seasonal dishes, Game specialities and regularly on the menu.

In the Toutoune restaurant, the Shani family serves a variety of international dishes, including numerous Mediterranean dishes, in a modern setting. The delicious falafel and various tarte flambée are very popular and also recommended.  Daily changing lunch menu, which can also be enjoyed on the sun terrace.

Regional, European and Asian dishes are served in the international gourmet restaurant in the hotel “The Chedi Andermatt” with 15 GaultMillau points. In four studio kitchens, guests watch the chefs while they are cooking, as the food is freshly prepared. For dessert, there is a selection from the five-meter-high cheese tower.

Andermatt is as pretty as they comet, and you don’t need to scale the highiest peak to admire it’s beauty.

Snow-Shoeing
Off-piste and away from the hiking trails, endless expanses of powder snow await on Andermatt’s wide range of marked showshoe routes. The winter paradise of Arni with its frozen mountain lake and white forests makes every hiker’s heart beat faster. This popular route is 2km and should take less than 1 hour. Looking for something more challenging? With an ascent of 995m, the snowshoe route from Realp to the Albert Heim-Hütte guarantees variety and requires a good level of fitness.

Tobogganing
For young and old alike, sledding is the ideal way for non-skiers to experience the mountains in winter. Andermatt and St. Gotthard offer plenty of trails. You can take the train to your starting point or get there on foot. With its gentle incline, the sledding trail on the Oberalppassstrasse is ideal for the whole family. The Gütsch Express cable car and the Matterhorn Gotthard train will both get you to the starting point.

You can get half-day or full-day sledding passes, which give you unlimited use of the almost six kilometres of sledding trails from Nätschen to Andermatt and from Milez to Dieni. Sleds can be rented at the Nätschen valley station or from Meyer’s Sporthaus at Andermatt train station.

Ice Skating
Red-hot blades, elegant pirouettes, ice-hockey matches. All this in the middle of the village on a natural ice rink. Between Christmas and the end of February, the tennis court in Andermatt is transformed into a natural ice rink. Ice-skate hire on site. There is an additional natural ice rink located in the Gotthard tunnel village.

Horse-Drawn Cart
The horses snort; the snow crunches beneath their hooves. A stay in Andermatt is easily completed by something special with a horse-drawn sleigh ride. Cosily wrapped up in thick furs, visitors ride through the winter wonderland of Andermatt and the Ursern Valley.

Centrally located, Andermatt can be reached from Zurich or Lugano in two hours or less.

By car: leave the autobahn at Göschenen. From there, Andermatt is just a ten minutes’ drive.

By train: take the Gotthardschnellzug (Gotthard Express) to Göschenen and change onto the Matterhorn Gotthard line, which will get you to Andermatt in just ten minutes.

LOOKING FOR SOMETHING SPECIAL? 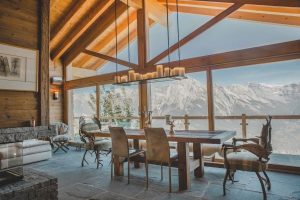